Some of our projects have that magical ability to place us right at home chronologically and aesthetically, and that’s just how we like it. Our two latest typefaces bring the 1970s layered science fiction display leaping forward a half century. The prog rock connection was but one perk here. […]

We now live in the golden age of machine-readable information and analysis. One of the sturdiest steps on the ladder that got us here was MICR, a technology invented in the mid-1950s that remains in use in banking documents to this very day. MICR was the first character recognition tech to employ shapes easily readable by both machines and humans. So while the history of machine readability’s progress is fascinating in its own right, the MICR standard in particular was arguably most influential on futuristic design from a typography standpoint. Futuristic alphabets before MICR exhibited a distinct Art Deco aesthetic. About a decade after the dissemination of the MICR standard, alphabets depicting the future were all about minimalist geometry, modulation and squareness — deeply inspired by those MICR digits. The jump from machine-readable to “this is how we describe our future” was all but inevitable.

To alphabet nerds like us, the original MICR digits and the many typefaces they spawned in the 1960s and 1970s always appear with a knowledgeable wink: Alphabets have intricate and mostly ignored histories that are fully revealed only to those with the inclination to dig deep. And so here we are. The Ender family we’re unleashing on the world now is what we imagine someone familiar with the past 50 digital years would have extrapolated from the MICR forms upon travelling back in time to the mid-1970s — quite the fun trip if you don’t mind the gaudy resolutions and an international oil crisis or two.

We did spend quite a bit of time back there; long enough to build an original font informed by the various bits of the MICR shapes, a skeletal light counterpart that slightly nods at the late-1960s OCR standard and works surprisingly well in text settings, inline options and three depths of extrusion for chromatic layering treatments. Each of the fonts comes with plenty of features and surprises, so we put together this Ender User Guide detailing the different functionalities available in there. We encourage you to check it out.

A simple idea, a hand-made word on an old album cover and a lot of nostalgia were the main ingredients of this perfect storm. The idea was building an alphabet of nothing but dots and straight lines. The album was Crime of the Century and the word was Supertramp. The nostalgia was probably just an aging and youthful memories thing. Then of course there’s the tendency to get carried away with all that.

Staring at that Supertramp logo mark (Fabio Nicoli, 1974) for too long can really open the floodgates of any designer’s imagination and become a rabbit hole of euphoric proportions. In this case, endless possibilities kept appearing within the sticks-and-balls DNA; possibilities of forms, weights, combinations, interpolations, chromatics, thematics, you name it. When the building blocks are this minimal, the final structure can be anything the mind perceives.

Bagatelle is a 6-weight chromatic family that comes with a variable font that allows for precise weight control of its two main DNA elements. With more than 1500 glyphs per font, Pan-European language support is on offer, along with many OpenType features for intelligent alternation, stylistic substitutions and form connection. This PDF document offers a closer look at Bagatelle’s many facets. 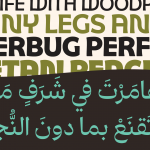 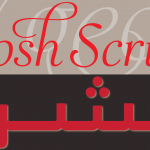