Designed and perfected over a decade by veteran type designer Rod McDonald, the Goluska family is a tribute to an American-Canadian typographer and book designer whose enthusiasm for the work of William Addison Dwiggins served as the initial spark for this typeface’s open aesthetic. […]

Goluska is a new typeface designed by Rod McDonald in tribute to the late Glenn Goluska. Born in Chicago in 1947, Goluska got his start as a typesetter and book designer at Toronto’s Coach House Press in the mid-1970s and became a key figure in the typographical reawakening that was underway in the city at that time, alongside Stan Bevington and Nelson Adams (Coach House Press), Robert MacDonald (Dreadnaught Press), William Rueter (Aliquando Press) and others. Goluska went on to establish his own letterpress printshop and design studio, operating under the imprints imprimerie dromadaire and Nightshade Press. After relocating to Montreal in the early 1990s, his creative focus shifted toward digital design and trade work for commercial clients like McGill-Queens University Press and the Centre for Canadian Architecture, but the Linotype and letterpress printing remained an important part of his practice. Shortly before his death from cancer in 2011, Goluska was the recipient of the Robert R. Reid Award for lifetime achievement in the book arts in Canada.

Goluska was an enthusiast for the book design of W.A. Dwiggins and for the types he designed for the Linotype linecasting machine, making Dwiggins’s work an appropriate starting point for McDonald’s new typeface. While a Dwiggins aesthetic is clearly present in the lettershapes of Goluska it is by no means a revival of any of Dwiggins’s types. Much as Dwiggins captured the spirit of the ‘Scotch Modern’ style in Caledonia while simultaneously producing a thoroughly original 20th-century design, McDonald transposes elements of Dwiggins’s style to create Goluska, an original text typeface robust enough to meet the demands of a new generation of designers working in the contemporary typographic landscape. Whether it’s used on screens or in traditional print formats, Goluska’s open counters, clean curves and sharp finish make it highly legible across a range of sizes.

While trial versions of Goluska have been in private use since 2011, the definitive version has finally become available from Canada Type. Goluska is available in three ready-made weights with accompanying italics. Each font comes with built-in small caps, a complete set of f-ligatures, eight kinds of figures and automatic fractions. A versatile variable version with a weight axis is complementarily included in the complete font package.

Also included with the purchase of the complete font package is a copy of the beautiful Goluska: A Specimen printed book, shipped at no extra charge to anywhere in the world. The specimen book was designed and edited by Andrew Steeves, who had been field-testing versions of Goluska in books, periodicals and catalogues for nearly a decade, providing priceless real world ‘ink-on-paper’ feedback. Andrew also letterpress-printed the cover. The specimen book was printed at Halcraft Printing in Halifax, NS, and bound at Gaspereau Press in Kentville, NS. 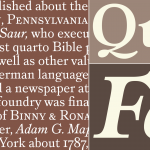